When Truth is More Powerful Than Lies 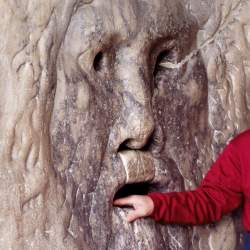 I love the line from The Police's 1983 album, Synchronicity:

We were at a policy meeting / They were planning new ways of cheating...

Sometimes it seems like that's all marketing and politics are. Okay, most of the time. But it doesn't have to be that way. And though you might not believe it from all the tricks and techniques and "loopholes" that the gurus ramble on about, the truth can be more powerful than "new ways of cheating".

Many people are tired of being sold a pack of lies, especially in certain markets (like the diet industry, the investment industry, or the business opportunity industry).

To people who are sick of lies and hype, nothing will sell better than unvarnished truth.

That reminded me of a story that a friend from church once told me. He was working on a team out in the San Fransisco Bay Area that was doing an environmental impact study for some huge public works project. They were way behind schedule. So somebody called a meeting to come up with new excuses.

Only nobody was having much luck coming up with excuses that they though anyone would accept. So my friend suggested that they simply tell the truth. We're way behind. We own it. This is how we're going to bust our booties to catch up.

Everybody thought for a moment. And then somebody said, "huh, that just might work!"

The funny thing is that they all decided my friend was some sort of brilliant political strategist. In fact, he was simply an honest man. Truth wasn't a tricky technique used to catch people off guard for him -- it was the right thing to do.

I'm not claiming that the truth is always the most effective way to make the sale. But it is the right way. The question you should be asking yourself isn't, "should I tell the truth?" It's, "what's the best way to present the truth?"

Nikole Fairview said:
I try to tell the truth in my sales. Of course, online you have to keep some things about yourself hidden for your own safety. In sales, the only way I think I might have slipped up in the past is by exaggerating, but I've been trying very hard not ...
(join the conversation below)