I’ll Subscribe to Your Blog, and Others Will Too, If…

I was going to call it "how to get me to subscribe to your blog," which sounds catchier -- and in fact, I'll keep the title of this post in that vein, because if you do what I'm about to describe, and your blog covers the right topic, and I find out about it, I will subscribe to it -- but I'm not so self-important as to think that you're all targeting me as you most wanted subscriber. So let's make it a little more general.

I got the idea for this post after reading something from Guy Kawasaki. This isn't going to be a Riff on that, though I may write one or two someday -- it's a post worthy of Riffing. What triggered this post was the fact that I didn't find Guy's post by following Guy -- I found it because Perry Marshall tweeted a link to it, and I'm following Perry.

So, here's the big question: why am I following Perry instead of Guy?

Is it because I don't think Guy's smart enough to bother following? No. Of course not.

Is it because I don't think Guy ever let's any of those smarts out and says or shares anything useful? No. He writes and links to some fabulous stuff.

The reason why I follow Perry instead of Guy is...

...Guy is a microcosm of the macrocosm.

By which I mean to say that I tried following Guy Kawasaki in Google+, but I had to un-circle him because he shares too dang much. And just as importantly, too much of it is stuff I'm not interested in. Not that it's bad stuff. It's just not what I'm after. (Google could fix this if they'd implement my final suggestion from this post, but that's another story.)

The same goes for Chris Pirillo. I circled him for about a day, but he was drowning out everybody else, and too much of what he shared didn't interest me.

And herein lies the key to one kind of blog that's worth subscribing to...

Curation...but a different kind of curation.

Usually when people discuss curation blogging, they're talking about combing the internet for good information and sharing it. What I'm suggesting today is a blog that curates nothing but the best of what one high-credibility, high-volume, person is sharing, and isn't shy about where they're getting their material.

Seriously, you could title your blog "The Best of What Guy Kawasaki Shares".

You want to pick somebody with lots of credibility if you're going to attempt this, because who's going to care about "The Best of What John Doe Shares"? (Other than John Doe's mother...who tried following him, but got fed up with all the noise.) Ride the coattails of somebody else's credibility.

You should also, obviously, pick somebody who shares a LOT -- preferably someone who covers several topics, since that'll increase the odds of people being bored by lots of what they share. Otherwise, why would anyone subscribe to you rather than following the source directly?

How to Do It, Step-By-Step

The simplest approach would be simply to create a Twitter account, rather than a blog, and using for nothing but retweets of the best of what one particular person tweets. Shall we call that person "The Source" or "The Well"? I like "the Well" -- it's snappier. "Need some good content? Go to The Well."

Want proof that this is a good idea? I found two Twitter accounts that were created to do exactly this with Guy Kawasaki's tweets. Neither followed through for long (one has no tweets, and the other has 4). But one has 402 followers (and is only following 20 people), and the other (the one with NO tweets) has 1242 followers, and isn't following anybody. The demand is there. Wanna be the supplier?

If you want to make a blog of it rather than just a Twitter account (which would probably be a lot more valuable), the process is a little more involved. (I'll have to look into how you might do this with Google+ instead of Twitter -- I have an idea, so you may hear more from me on that later.)

We want an RSS feed of all the stuff The Well shares. The easiest way to get one is to create a Twitter list and put the person on it.

Enter a name for your list, optionally enter a description, and be sure to make the list public. If you make it private, you're going to have a hard time subscribing to the RSS feed. 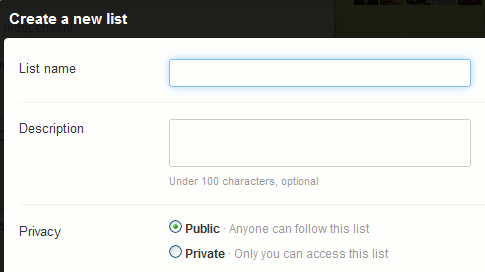 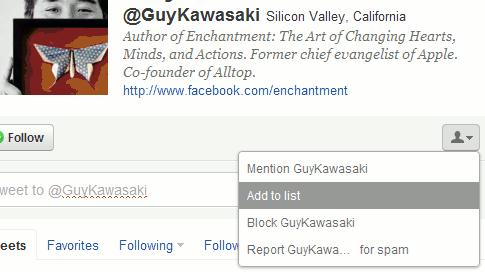 Then check the list you want to add them to.

You could do this with some other RSS feed reader, but as you'll see below, SEO Content Factory makes the process really easy, since this is exactly the kind of thing it was designed for.

Make sure you've activated SEO Content Factory's "Full Content" plugin, and configure it as shown here. You can also select "At Display Time" rather than "Manually" to save yourself clicking "Get" in step 5, below. I use "Manually" since I'll often know without looking at an article that I don't want to bother filling my database with its full content.

Click the "Configure Publishing Plugins" icon. For a WordPress blog, click "Configure for Atom Publishing Protocol" (you can also publish to Blogger, Posterous and Tumblr blogs). Enter the blog URL (for WordPress blogs, you can just enter your blog URL rather than the service document URL), username and password. Then click "Continue" and follow the prompts. 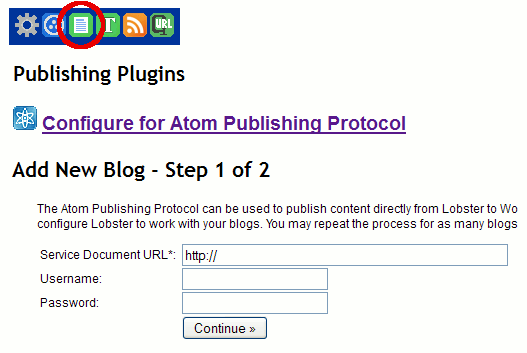 Step 5: Check Out the Articles "The Well" Links To

Click "Get" (unless you selected "At Display Time" in step 3, above, in which case, it'll already be done). Then you'll see something like this: 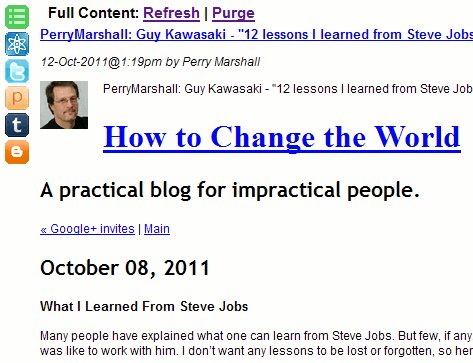 Then read (or at least skim) the article and decide it it's worth sharing. If so...

Select a quote and click the publishing icon that corresponds to your blog type.

An editing form will open up with the text you selected already formatted in a "block quote".

In this case, since you're getting the content via a Twitter feed, the pre-formatted link will be pointing to the tweet and naming the person who tweeted it ("The Well"), which may not be where you want to link or the author of the article, so you may need to adjust that. (If you do this with a blog's RSS feed instead of a Twitter feed, the name and link will be correct automatically.)

Add a comment or two if you wish (or write a whole article inspired by the quote). Don't worry about adding HTML code if you don't want to -- just type your comments, leaving two blank lines between paragraphs, and they'll get formatted correctly automatically. Then select the blog you want to publish to, select a category (a list will appear after you click the checkbox) and hit the publish button (not shown in this screen shot -- it's a little farther down). 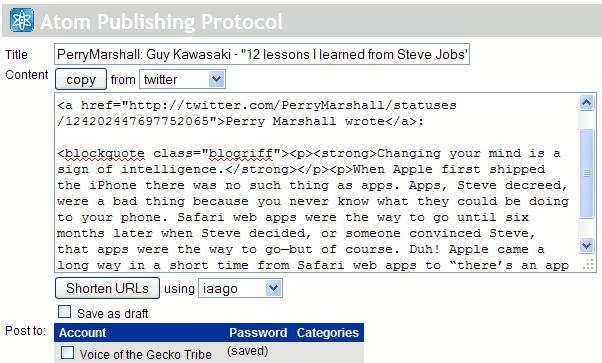 To ensure that readers recognize that you're curating things The Well shared, you might want to introduce each post with a comment like "This morning, Guy Kawasaki shared a link to this article by John Doe". (In fact, in SEO Content Factory, you could create a custom post template that hard codes everything but the article author's name so that you don't have to retype that sentence each time.)

You now have a blog full of high-quality content, but you don't have to write the content yourself, it's easy to find because instead of combing through the entire blogosphere, you're just combing through things that one smart person is sharing, and you're borrowing some of their credibility.

Anybody wanna do this for Guy Kawasaki and Chris Pirillo? Do it well enough, and I'll subscribe to your blog.