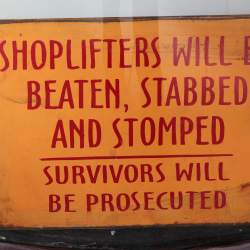 Last July, I posted an article, inspired by Seth Godin, entitled Do Only Cheaters Prosper? Something one of my Twitter followers, Robert Medak, wrote recently brought the question back to mind yesterday. He said:

Treating customers ethically and honestly is good for your bottom line, customer retention, and word of mouth advertising.

What you are helping to create is a world where a moral code of business ethics in which honesty, integrity, and quality are normal for customers.

I think some people get a little nervous when we talk about business ethics, worrying that the cheaters will drive them out of business. They worry that in a world where ethics are the norm, cheaters will have a big advantage.

But is it true?

Robert is undoubtedly right that ethics are good for customer retention and getting word of mouth advertising.

All this sounds good. But what about the people who, for example, use black hat SEO to get to the top of Google? Don't they prove the opposite?

Not really. What they prove is what Gandhi said:

When I despair, I remember that all through history the way of truth and love has always won. There have been tyrants and murderers, and for a time, they can seem invincible, but in the end, they always fall.

Yes, the black hats may enjoy their 15 minutes, or 15 days, or even 15 weeks atop the search results. But eventually they're eaten by a rampaging panda or penguin. And then what happens to them? Do they drop from the #1 spot down to #3 or #4? No. They disappear, or at least get shoved down so far that they're never seen by human eyes again.

MikSas said:
I wouldn't compare black hats to "tyrants, murderers" but then again being nice, without being too apologetic, is definitely good business practice not to mention sowing good karma.
(join the conversation below)

So, is it worth going black hat to get your 15 minutes of fame? Time for some calculus (don't worry -- it'll be painless. And if you're not familiar with calculus, you won't even recognize it as calculus...which is sort of obvious, but you know what I mean.) Here's a little graphic I scribbled up today. The red lines are black hat rankings. The green line is white hat. 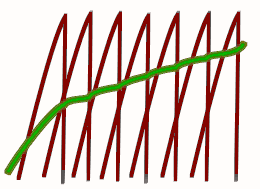 Which line do you want?

You might be tempted to pick one of the red lines, because it goes higher. And you wouldn't be all wrong. The top search 3 results get the lion's share of the traffic...while they're up there. But take a look at the total area below each of the curves (that's the calculus part). There's a heck of a lot more under that green line than there is under any of those red lines.

Cheaters may go down in a blaze of glory. But they do go down. And when they do, everything they've worked for is gone.

If another cheater surges to the top in their place and then goes down in flames, we might be tempted to think that they're winning, because one of them is always on top. But unless it's the same cheater every time, they're getting less than those who's values keep them strong for the long haul.

If you're still having a hard time shaking the suspicion that the ethical people are losing because they're not in first place, imagine how that graphic would look if it only had one red line on it. If you had to choose between that line and the green one, 99% of the time, the green line would look better. That's the reality. Cheaters only look better if you happen to see them at the moment they're enjoying their lucky break. Which not all cheaters ever do.

Are business ethics profitable? Even if profits are all you really care about, I'd recommend sticking with ethics.